Toshiba and SK Hynix co-developed a 4-Gbit STT-MRAM chip, and presented a prototype at IEDM 2016. 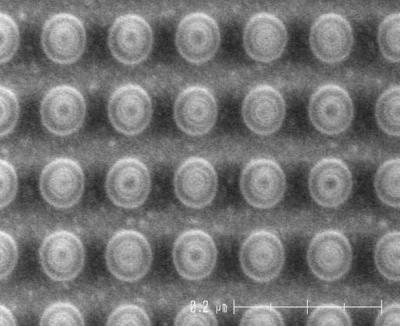 The prototype chip is made from eight 512-Mbit banks, and the cell area is equivalent to that of DRAM - at 9F2, which Hynix says is much smaller than conventional STT-MRAMs (50F2).

HP says that their two terminal memristor (Resistive RAM) technology will be launched in 18 months - and will "start to take market share from flash memory". The company has 'big plans' for the new memory technology and are working with Hynix to launch the flash replacement chip in 2013. The company also plans to go after the DRAM market in 2014/2015 and later the SRAM market as well.

HP has over 500 patents on this technology alone - but it isn't the only company working on memristor devices - in fact Samsung has an even bigger team working on a similar project.

Samsung announced that it has acquired Grandis, developer of STT-MRAM technology. We do not have any financial details yet, but Grandis' CEO Frahad Tabrizi said that this deal serves as a& "very successful exit" for Grandis's investors. Grandis raised $15 million since it was founded in 2002 (and also raised about the same from DARPA grants including a $8.6 million second-phase project granted in June 2010).

Grandis licensed their technology to several companies. We know that Hynix licensed it in 2008. The company was also collaborating with Renesas technologies.Â Hynix and Grandis were developing a compact in-plane MTJ based STT-RAM device that uses modified DRAM processes at 54nm.

Toshiba has been developing STT-MRAM for quite some time, and just a few days ago reported a breakthrough MTJ device that could pave the way towards Gigabit MRAM devices. They expect such chips within 3-4 years, so that's probably the same time frame on the new JV with Hynix.

During the International Electron Device Meeting (IEDM) exhibition we got some updates about STT-MRAM research done at IBM, Samsung and Hynix-Grandis (who are researching STT-MRAM together).

IBM is working together with TDK and has presented a new 4-kbit perpendicular STT-MRAM array using tunnel junctions. Samsung has presented an on-axis MRAM with a novel MTJ, which they say open he way towards sub-30nm scaling. Using ferromagnetic electrode and a different MTJ structure design, Samsung think that they can scale this to a sub-20nm level.

The Korean Government has decided to fund STT-RAM research for Hynix and Samsung in a $40 million project. The government will pay around half of the sum for the project, which is intended to run till 2014. The project calls for the government to work with Samsung and Hynix together for research and development on STT-MRAM chips. Korea aims to control around 45% of the 30-nano type memory chip market by 2015.

The companies have already opened a new laboratory at Hangyang University's fusion technology center. It is already equipped with a fully operational 300mm magnetic thin film deposition system and other chip-making facilities.

Samsung and Hynix have started to work on 30-nano STT-RAM. They hope to have chips out by the end of the year (probably samples only...). It appears that the Korean government is helping to fund the project.
Samsung and Hynix announced the JV in 2008, they hoped to get commercial chips by 2012. Hynix has licensed STT-RAM technology from Grandis in 2008.

The two suppliers have signed an agreement to expand their existing program withÂ stated aims being:

Samsung and Hynix are to launch their STT-RAM JV in September (after having announced their intentions in January 2008).

The companies said they will engage in joint research and development (R&D) of spin-torque-transfer magnetic-random-access-memory (STT-MRAM) chips, and become the industry standard-setters for the next generation 450mm wafer fab market.