» Yole sees STT-MRAM as the most suitable technology to...

Yole Developpement released a new emerging-memory market report in which they try to asses the future of the memory market. Yose says that Phase-change memory (PCM) is pretty much dead, and the two main emerging memory technologies are MRAM and Resistive random Access Memory (ReRAM or RRAM). 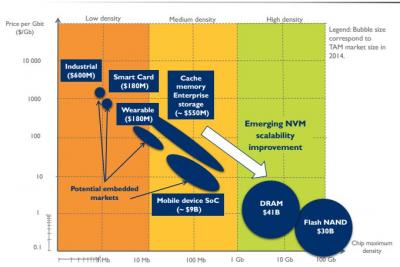 While RRAM is very promising in the near future, with support from Micron (they plan to release RRAM chips in 2015) and Panasonic while other players are expected to react quickly. RRAM and STT-MRAM will compete in 2015-2016 in some standalone markets (such as embedded MCU, wearables and smart cards and the storage class memory for enterprise storage which will be the biggest market), and it's not clear yet which technology will be the most popular.

But in the long term, Yole feels that STT-MRAM is the only candidate to substitute DRAM due to its high endurance, while RRAM will replace NAND due to its high scalability and low cost.

Regarding the current MRAM market, Yole estimates MRAM sales at $36 million, which is lower than expected the MRAM makers (Everspin, Crocus and Avalanche) delayed their product introductions, and the current business is limited to niche low-density applications. But there are signs taht the market is evolving with recent good news from Everspin (and Global Foundries), Micron, IMEC (with Qualcomm and Global Foundries), Applied Materials (TEL) and Samsung.

Yole sees MRAM (or STT-MRAM, really) sales ramping up steadily starting in 2015. Starting in 2018, yole sees STT-MRAM as the leading candidate to start grabbing DRAM market share as by then the DRAM technology will reach its limits. They expect Micron to introduce a DRAM-replacement STT-MRAM product in 2018.