Researchers from Samsung's Advanced Institute of Technology (SAIT), have demonstrated what they say is the worldâs first in-memory computing based on MRAM, targeting next-generation AI chips.

The researchers explain that In-Memory computing is a new paradigm that seeks to perform both data storage and data computing in a memory network. In such a computing system, a large amount of data, stored in the memory network, can be executed in a highly parallel manner. Power consumption in such systems is substantially reduced.

In March 2019 Samsung Electronics announced that it has started to mass produce its first embedded MRAM devices, made using the company's 28nm FD-SOI process. In early 2021 Samsung announced that it managed to improve the MTJ function of its MRAM, which makes it suitable for more applications, and today, at the company's 5th Annual Samsung Foundry Forum, Samsung provides more details on its MRAM roadmap.

Samsung says it is advancing its 14 nm process which will support flash-type embedded MRAM which enables increased write speed and density. Samsung targets applications such as micro controller units (MCUs), IoT and wearables for its next-gen eMRAM.

In March 2019 Samsung Electronics announced that it has started to mass produce its first embedded MRAM, made using the company's 28nm FD-SOI process. The company now announced that it managed to improve the MTJ function of its MRAM, which makes it suitable for more applications.

Mentor announced that it will provide a unique IC test solution for the Arm's eMRAM compiler IP which is built on Samsung Foundryâs 28nm FDSOI process technology.

Samsung announced that it has started to mass produce its first embedded MRAM, made using the company's 28nm FD-SOI process. Samsung says that its eMRAM memory module offers higher performance and endurance when compared to eFlash, and can be integrated into existing chips.

Samsung details that its eMRAM is 1,000 times faster than its eFlash memory, and it does not require an erase cycle before writing data (unlike Flash memory). The voltage used is also lower - and in total eMRAM consumes 1/400 the energy compared to eFlash for the writing process. Samsung's MRAM capacity, though, is lower than its 3D Xpoint, DRAM and NAND flash.

Digitimes says that Samsung has collaborated with NXP on this project. Samsung has completed the tape-out of its embededd MRAM which will be first applied to NXP's new low-power i.MX-series chipset targeted at automotive, multimedia and display panel applications.

During Samsung Electronic's Foundry Forum, the Korean chip maker reaffirmed its goal to start producing STT-MRAM chips in 2018. In fact Samsung now says that it will mass produce these chips next year, while last year it said that 2018 will only see limited production while real mass production will only begin in 2019.

Samsung demonstrated an LCD display that uses a tCON chip that uses embedded 28nm pMTJ STT-MRAM memory, instead of the normally used SRAM. The MRAM device had a density of 8Mb and a 1T-1MTJ cell architecture. The cell size is 0.0364 um2. 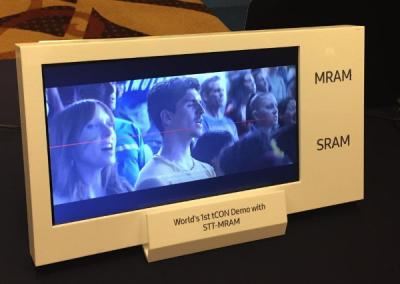 A tCON chip is a timing controller chip that processes the video signal input and processes it to generate control signal to the source & gate driver of the LCD display. The memory is used a a frame memory which stores previous frame data. Samsung prepared a test chip that contains both SRAM and MRAM memory devices to show that there is no difference between the two. SRAM replacement is a popular MRAM application.

Back in July 2016 (yes, we missed that one, but better late than never), Samsung Foundry's business development chief Kelvin Low said that the company is set to offer STT-MRAM on its 28nm FDSOI manufacturing process by the end of 2018.

To be more precise, the STT-MRAM in 2018 will be on a not-finalized process (what Samsung calls Risk Production Phase) - and real volume production will only begin in 2019. Samsung will be pushing its eFlash 28nm production before STT-MRAM will be available - but the company expects MRAM to be a favorite in the long term.

IBM researchers, in collaboration with Samsung researchers, demonstrated switching MRAM cells for devices with diameters ranging from 50 down to 11 nanometers in only 10 nanoseconds, using only 7.5 microamperes. The researchers say that this is a significant achievement on the way to high-density low-power STT-MRAM. 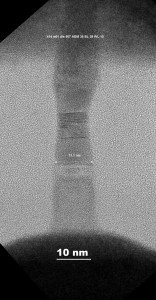