STT-MRAM has the potential to become a leading storage technology as it is a high-performance memory (can challenge DRAM and SRAM) that can scale well below 10nm and challenge the low cost of flash memory.

STT stands for Spin-Transfer Torque. In an STT-MRAM device, the spin of the electrons is flipped using a spin-polarized current. This effect is achieved in a magnetic tunnel junction (MTJ) or a spin-valve, and STT-MRAM devices use STT tunnel junctions (STT-MTJ). A spin-polarized current is created by passing a current though a thin magnetic layer. This current is then directed into a thinner magnetic layer which transfers the angular momentum to the thin layer which changes its spin. 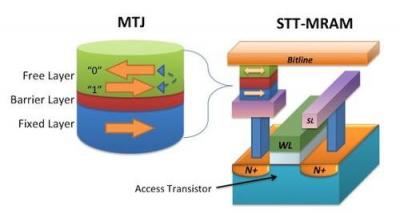 What is perpendicular STT-MRAM?

A "regular" STT-MRAM structure (similar to the one you see above) uses an in-plane MTJ (iMTJ). Some STT-MRAM devices use a more optimized structure called perpendicular MTJ (pMTJ) in which the magnetic moments are perpendicular to the silicon substrate surface. 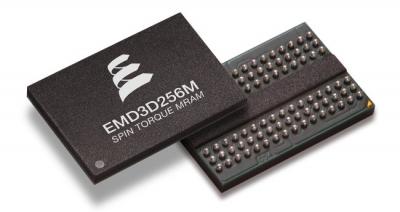 Everspin Technologies announced that it has amended its STT-MRAM joint development agreement (JDA) with GLOBALFOUNDRIES to set the terms for a future project on an advanced 12 nm FinFET MRAM solution. Everspin agreement included 40 nm, 28 nm and 22 nm processes, and now also include 12 nm. 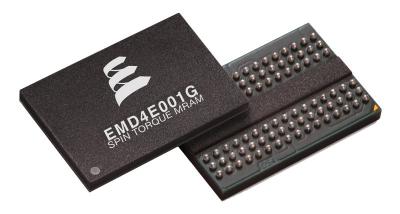 GF recently announced it has achieved initial production of embedded MRAM (eMRAM) on its 22FDX platform.

Researchers from Northwestern University suggest building STT-MRAM devices from antiferromagnetic materials - as opposed to the currently-used ferromagnetic ones. The researchers say that these materials will enable higher-density devices that feature high speed writing with low currents.

Antiferromagnetic materials are magnetically ordered at the microscopic scale, but not at the macroscopic scale. This means that there is no magnetic force between adjacent bits in MRAM cells built from these materials - which means you can pack them very close together.

An SL-STT-MRAM is based on an SL-STT-MTJ, which uses a superlattice barrier to replace the single crystalline (MgO) barrier in traditional STT-MTJ. The superlattice barrier is made of alternating metal and insulator layers, in which only amorphous rather than single crystalline is used in the insulator. The SL-STT-MRAM features higher reliability for repeated writing than compared to traditional MgO based STT-MRAM.

Everspin Technologies announced that It is has received the qualification notice from a major OEM for its 1Gb STT-MRAM device. The company is now qualified to start making production shipments of its new chip for its first customer.

Everspin further announced that since it started MRAM production, it shipped over 120 Toggle MRAM and STT-MRAM devices. 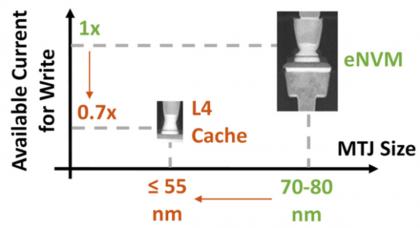 Intel's new STT-MRAM features 20 nm write times, 4 ns read times, an endurance of 1012 cycles and memory retention of one second at 110 degrees. The bit rates are good enough to be handled with error-correcting code (ECC) techniques. To achieve these features, Intel reduced the magnetic junction size to 55 nm (from 70-80 nm it had achieved before). 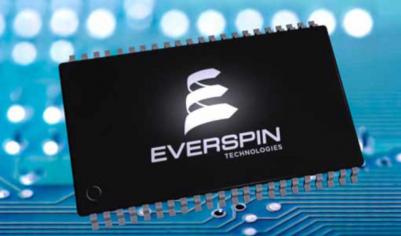 At the end of the quarter, Everspin had $14.8 million in cash and equivalents. For the next quarter, it expects revenues to be between $9.3 million and $9.7 million.

Using MRAM instead of DRAM memory enabled IBM to remove the relatively large supercapacitors (used to make the DRAM non-volatile) and so the company was able to reduced the size of its drives and switch to a standard 2.5-inch U.2 drive form factor.

Everspinâs 1 Gb STT-MRAM product family includes both 8bit and 16-bit DDR4 compatible (ST-DDR4) interface versions of the device and are available in a JEDEC-compliant BGA package.

Hprobe, a developer of testing equipment for magnetic devices, announced that it developed a new technology for ultra-fast ( 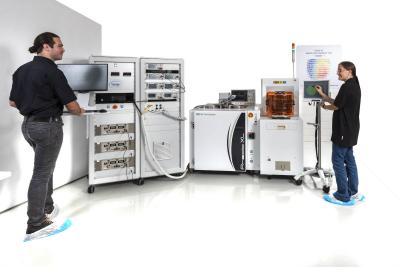 Hprobe will integrate the new technology into its Hprobe ATE systems to drastically enhance the sorting flow of STT-MRAM wafers at major 300mm foundries.