The NEC Group focuses on two core areas of business: integrated IT / network solutions and semiconductor.

NEC has been developing MRAM technologies for a long time, collaborating with both TMSC and Toshiba. NEC are also working on perpendicular MRAM. NEC planned to commercialize pMTJ-based MRAM chips by 2010, but that plan did not materialize.

NEC Corporation and Tohoku University have developed an MRAM based CAM (content addressable memory) that includes non-volatile storage by using the vertical magnetization of vertical domain wall elements in a cobalt-nickel active layer. They call this Spin-CAM. 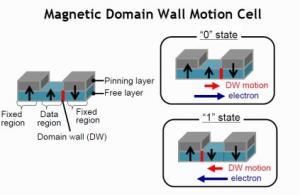 Today, for example, LCD TVs have two kinds of standby - "fast standby" which consumes as much as 15W, and 'slow standby' that may consume as low as 0.1W, but may take a few seconds to show a picture when powered back on. The MFF might make it possible to design a stand-by mode that is both fast to power on, and uses minimal power.

A couple of days ago we reported that NEC are working towards perpendicular MRAM using 2T1MTJ... now we have some more info, thanks to TechOn.

NEC and NEC Electronics employed a new method called "spin torque domain wall displacement write method" to reduce write current and realize microfabrication at the same time. In fact, they aim to reduce the current by as much as 90%. They were also able to increase speed to 500Mhz. This technology is not 'new', it was announced in 2007, but now they have a test chip ready. 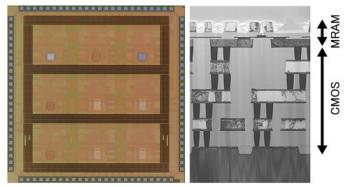 The newly developed current-induced domain wall motion writing method, using spin torque and perpendicular magnetization material, is capable of reducing current while writing for a scaled down cell beyond the 55 nanometer process.

NEC announced the successful operational demonstration of a 32Mb MRAM that can be embedded in SoCs. NEC has reduced the area of control circuits in the 32Mb MRAM design in order to achieve superior cell efficiency that enables 73% of a memory macro's area to be allocated to memory cells. This was achieved by developing write circuits, which enables greater memory capacity.  The high-speed cycle time of 9ns was achieved by adopting new decoder circuits that minimize delay.

Furthermore, compatibility with an asynchronous SRAM was achieved by inserting protocol transform circuits between the MRAM macro and I/O buffer circuits.

NEC has announced it managed to make a 1-bit Magnetic Flip Flop (MFF, as they like to call it). Unlike existing flip-flops, it does not need power to retain the value.
NEC suggests using such flip-flops instead of regular ones, and using MRAM instead of SRAM and you can make a system on a chip that does not need power to store data. MRAM is better than FLASH, says NEC, because of the unlimited write cycles.
NEC's MFF opereates at 1.2V or less, like regular flip-flops. The clock speed can be up to 3.5GHz.

NEC Corporation announced that it has succeeded in developing a new SRAM-compatible MRAM that can operate at 250MHz, the world's fastest MRAM operation speed. MRAM is expected to be the dominant next-generation memory technology as it realizes ultra fast operation speeds, nonvolatility - ability to retain data with the power off, and unlimited write endurance.

Verification at the SRAM speed level proves that the newly-developed MRAM could be embedded in system LSIs as SRAM substitutes in the future.
Read the full story Posted: Nov 30, 2007

In an effort to someday profit off of the manufacturer of surface-conduction electron-emitter display or SED devices, Canon yesterday bought 53.9% of NEC Machinery and all of NEC Machinery’s shares in Anelva Corp., a subsidiary of NEC Corp. Anelva is a japanese company that manufactures major equipment for the fabrication of semiconductors and LCDs using vacuum technology. Anelva developed a 200- to 300-mm-wafer-compliant deposition (sputtering) equipment for MRAM, the C-7100, using their unique low-pressure plasma deposition technique.

New MRAM technologies are the spotlight at the VLSI 2005 symposium

MRAM has been considered as a potential next-gen memory technology for quite some time, and it was in the spotlight at the VLSI 2005 symposium. NEC and Toshiba jointly unveiled a new Toggle MRAM cell structure in which the magnetic tunnel junction has a multi-layered structured.

Fujitsu Laboratories presented a new approach to MRAM circuity. The company is developing embedded MRAM and they have now proposed a one-transistor/two-magnetic tunnel junction (1T/2MTJ) structure MRAM cell with a direct voltage-sensing scheme, which it said has the advantages of DRAMs. In the proposed 1T/2MTJ cell, two MTJs were connected in series. Fujitsu fabricated the test device with each MTJ measuring 0.2 x 0.4 micron and confirmed the cell operation.