» Spin Transfer Technologies create one of the fastest...

Researchers from NY University, together with Spin Transfer Technologies have demonstrated magnetic vector switching for current pulses as short as 100 picoseconds. This is among the shortest write times reported by developers of MRAM devices. 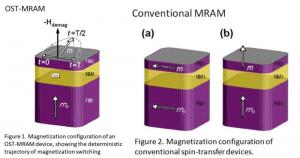 The underlying technology is based on a unique orthogonal orientation between the magnetic vectors in two magnetic layers -- a pinned magnetic layer where the magnetic orientation is fixed and a free magnetic layer where the magnetic field is aligned in one of two directions, thereby storing one bit of binary information. In contrast, all other MRAM efforts involve magnetic vectors that are both parallel to the physical layers or both perpendicular to the layers. Termed Orthogonal Spin Transfer MRAM (OST-MRAM), the technology results in a deterministic switching behavior, which enables high speed and very low power device operation. Other approaches result in stochastic switching which involves thermal fluctuations to initiate or hasten the switching process, leading to an incubation delay and requiring higher power for operation.

In addition, the OST-MRAM technology allows the use of magnetic tunnel junctions to achieve large read-out signals, while maintaining the advantages of deterministic switching and low power operation. Another key aspect of the technology is that it does not require sophisticated processes, such as magnetic annealing, for the fabrication of devices. This will significantly lower the cost of future commercial devices based on OST-MRAM technology, compared to other MRAM devices currently in development.

Back in October 2008, we have talked to Vincent Chun from Spin-Transfer-Technologies, and he explained their tech and plans.